Finally a movie that manages to get me out of my writers block! Barfi! is an endearing and charming film, ?that establishes the fact that one does not need hard hitting dialogues, action and thumping soundtrack to make a good movie. All you need is a simple story and an able director to handle the talented actors to make a brilliant movie. 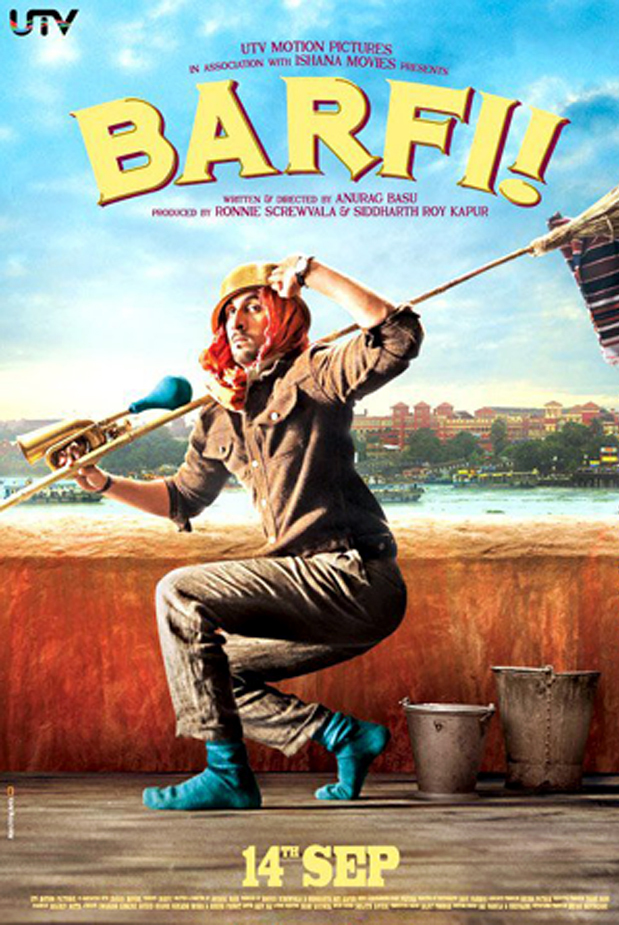 The best part about watching Barfi! is that it reminds us about the finer things of life. The joy of playing with bubbles, of riding a bicycle of eating a chocolate, watching a roadside plays, making paper planes and ships. It also brings back memories of the Charlie Chaplin era. Barfi is positively inspired from the escapades of Charlie Chaplin and likes. Many of the funny sequences and chase scenes seem inspired from Chaplin?s movies like The Tramp, Modern Times and The Adventurer. There?s also one scene that has a Charlie Chaplin cut out in the background. Seems like its Anurag Basu?s way of paying Homage to the great man.

The best part about Charlie Chaplin movies was that he managed to generate humor from the basic things of life. He was able to use any prop to bring out a funny moment. Nothing from a loaf of bread to industrial machinery was spared. The other great part was that his characters braved extraordinary situations with a smile on their face.

Rarely do you see such a combination in the current films. And even if you do, it is bogged down by unnecessary clich?s and cry a minute screenplays. Barfi sets itself apart by following the Chaplin way, and succeeds.

The central premise of Anurag Basu?s new film is that true love is unplanned, unpremeditated and is a pure impulse of the heart. Set in Darjeeling and Kolkata, the story flits about non-linearly from present day to 1976 to 1972 to tell the tale of a mischievous and lively Barfi (Ranbir Kapoor), a deaf-and-mute livewire with always a trick or prank up his sleeve and a local cop (Saurabh Shukla) down his tail. He falls for Shruti (Ileana D?Cruz) who is already engaged to a rich college sweetheart from Kolkata. Barfi?s vivacity and charm rubs off on her, but it?s a love story doomed from the start. A family tragedy brings another girl into the picture. Jhilmil (Priyanka Chopra) is an autistic girl from a rich family with an uncaring father and apathetic mom. What follows is a tale of love, affection, care and a journey through the beautiful landscape of India.

It?s a complex tale smartly handled by sharing it simply. It?s a story laced with equal measures of humour and heartache. Its USP lies in never being too glum or overtly sob by or preachy. Barfi?s silence speaks a thousand words, his self-sacrificing love almost always manages to moisten your eyes and his antics almost never fail to bring out a smile. He makes viewer laugh through his tears, and cry between the giggles. Such is the overpowering effect of this marvelous film.

For a movie that barely have 100 lines of dialogues, the burden rest upon the director to bring out extraordinary performances from the lead pair. Dialogues are a way to express the characters emotions, but what if two of three main characters can barely speak?? The director efficiently uses his actors, the wonderful background score and the camera to do all the talking.

Firstly the movie has some very fine performances. Ranbir Kappor is spectacular in the titular role. His natural charm works well with the character and he uses his eyes and facial expressions to bring out a well nuanced performance. He keeps it simple and doesn?t go overboard with his characters disability. He is the main reason the movie works on so many levels. Ileana D?Cruz looks stunning and she carries off the different standpoints of her character well. I personally would have loved to praise Priyanka Chopra for her portrayal. Kudos to her for taking on a challenging role and it does work most of the times. But I just dint feel a connect with her character. Also in some of the scenes I felt she overacted. Never the less it?s a fine performance overall and hats off to her for taking it on. Saurabh Shukla provides another standout performance. His chemistry with Ranbir kappor is sparkling and the two share much of the laughs amongst themselves.

The Music is extraordinary. Both the background score as well as the songs. They blend amazingly well with the ambience of the movie and gives the movie a classical feel. Pritam is on a roll here although much of the music does sound similar to Hollywood classics its a well come break from Bollywood?s current ringtones.

A special Mention to cinematographer S Ravi Verman. The movie is a photographer?s paradise! The texture, the color the ambience the vivid pictures he creates are absolutely brilliant. He brings out the emotions of the characters with the colors in the frame. The way he captures the natural and earthen beauty of the locales is inspiring to say the least!

The movie does have its flaws and loop holes. Like the movie tends to drag a bit, mostly because some the scenes become repetitive. That and the kidnapping plot just doesn?t connect with the overall canvas of the film. Plus the Basu tries to play a lot many cards. He tries to make a movie about autism, about a deaf and dumb lad, a love triangle, a murder / kidnapping mystery. Most importantly, cinematic liberties are taken in such a manner that the audience is taken for granted like when Basu has an autistic girl living with a man. Now an autistic patient needs care all the time. They cannot function independently and they are dependent on those close to them. But Barfi moves in with Jhilmil and they live happily together in Calcutta. This defies logic. I mean this guy here is deaf, forget being dumb. He should at least be able to hear when she is in distress or is having her mood swings. Moreover, why the hell did they travel all the way to Calcutta? Forget how?

That said, these cinematic liberties are forgiven in the overall scheme of things. At least it?s better than watching Akshay Kumar ripping a Light pole out from the ground and trashing 50 men in front of him in Taashan!

The soul of the movie belongs to Anurag Basu. It?s because of him that the whole movie falls into place. He handles each and every aspect of the movie right from the idea to the screenplay to the art design beautifully and I would definitely be waiting for his next!

To sum up, if Charlie Chaplin were to make the movie ?Black? by Sanjay Leela Bhansali, he would have given the world Barfi. That seems a reason enough for you to watch the movie Right!?

WorthITT - When and how to decide if an artist needs an artist management agency or not?

Want to pursue a career as a writer? Here is how you go about it !

Are You An Artist? Know The Best Tips To Grow Your YouTube Channel

Then & Now: Evolution of Events Industry in India

20 Must-See Short Films From India You Must Watch

CHECK IT OUT HOW IT NEEDS TO BE DONE

Check out our information video to understand the potential of WorthITT. How it assists Artists & Talent Agents in streamlining their work and benefits them.
All an artist has to do is fill in their profile completely and embed their work across all the digital formats and maximize their chances for their next big break.
Talent Agencies, based on their license type, can put across there requirements and get the BEST fit.